Fondazione Roma Museo, the museum located in Via del Corso in Rome, is currently holding “Una grande avanguardia europea 1948-1951“, an important retrospective on the CoBrA Group curated by Damiano Femfert and organized in collaboration with DIE GALERIE.

CoBrA was a northern European avant-garde movement active from 1948 to 1951. The name was coined in 1948 by Christian Dotremont from the initials of the members’ home cities: Copenhagen (Co), Brussels (Br), Amsterdam (A). While CoBrA existed only for a very little time span and the founding members were the following six: Karel Appel, Constant, Corneille, Christian Dotremont, Asger Jorn, and Joseph Noiret the influence on 20th century Art can not be underestimated and today around 40 different artists are considered CoBrA members.

At this point you might ask yourself how all of this is connected to Nittardi?!

Actually Nittardi has a very strong connection to CoBrA since many of the members of the artistic movement were close friends of Peter Femfert and visited us often at the vineyard.  This also explain  why 3 CoBrA members realized the label and the wrapping papers for our Casanuova di Nittardi. Corneille, that lived in Paris and Marche, Italy, painted the artworks for the 1992 Casanuova, Pierre Alechinsky now 88 years old, realized the 2009 artwork and Karl Otto Götz, now 101 years old, made the label and paper for the 2012 Casanuova.

Nittardi with its magical natural surrounding and pristine atmosphere has been a special place of inspiration for these artists. We can appreciate natural and animal elements being at  base of their artistic creations rich in color and abstraction. An extraordinary blend of genuinely expertise, curious imagination and joyful playfulness characterize the artwork of these incredible artists as well, we can proudly say, our attitude here at Nittardi. 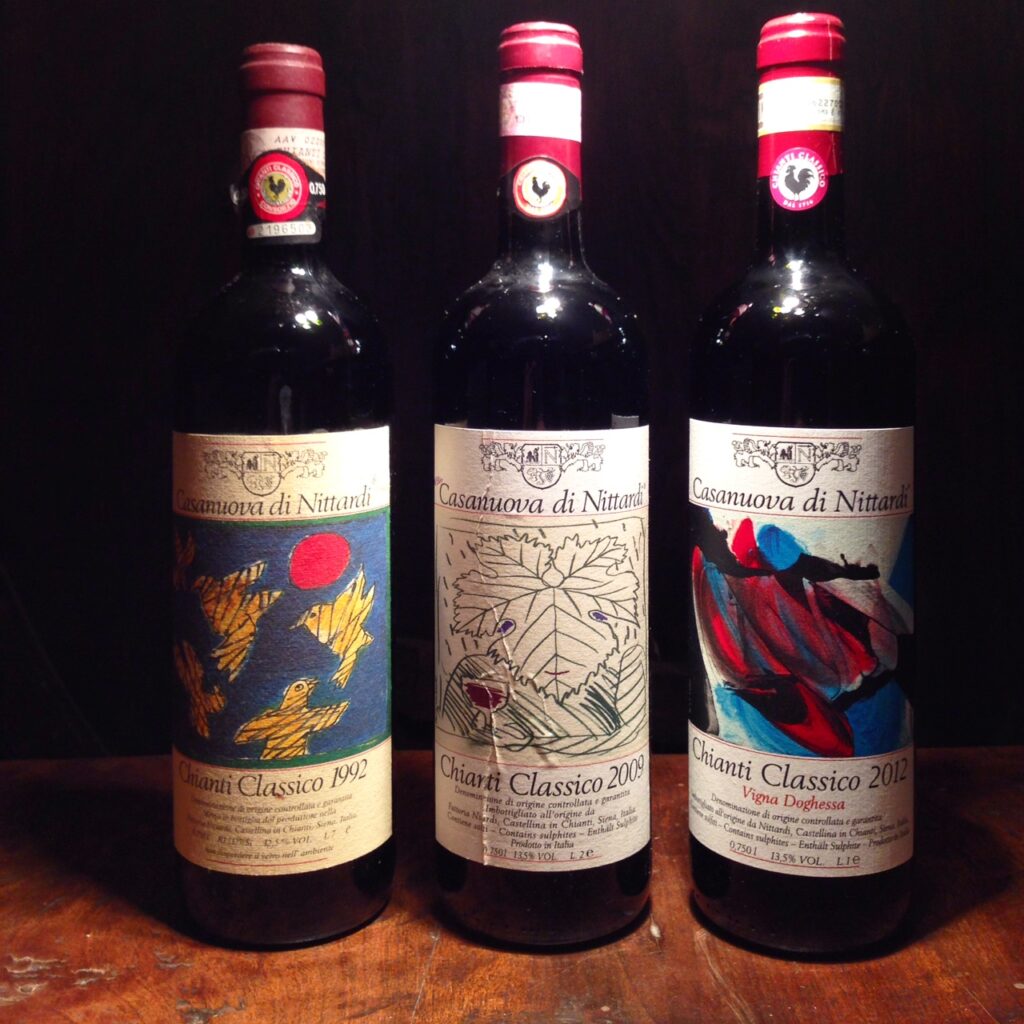 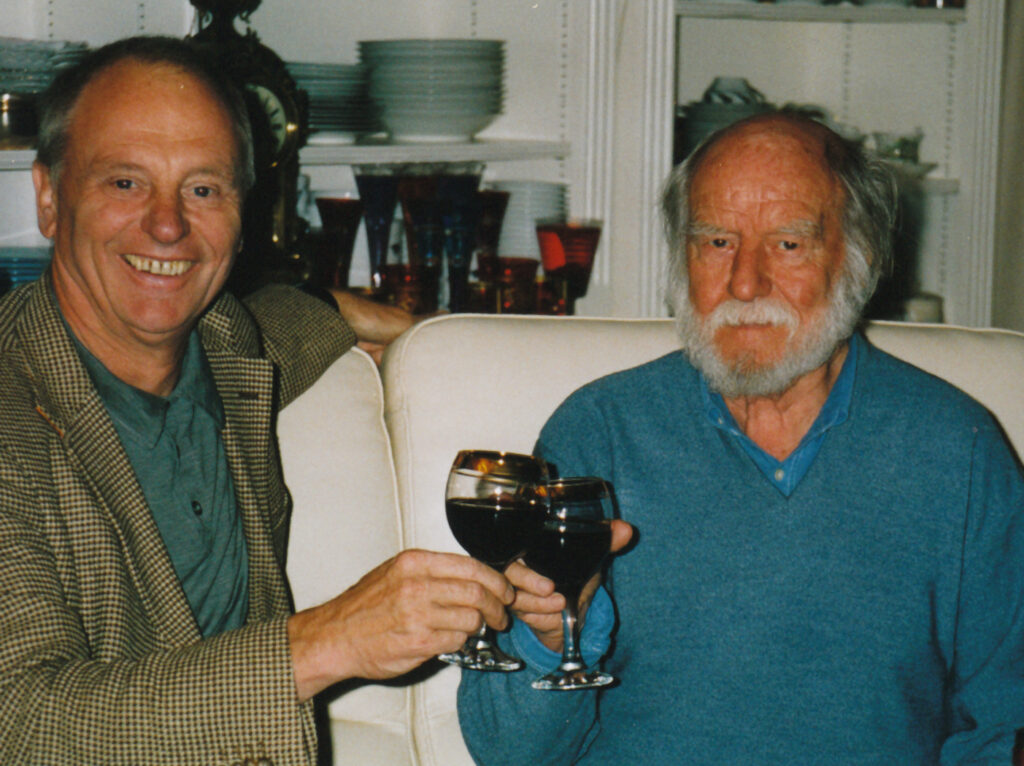 Peter Femfert and Corneille in 2004 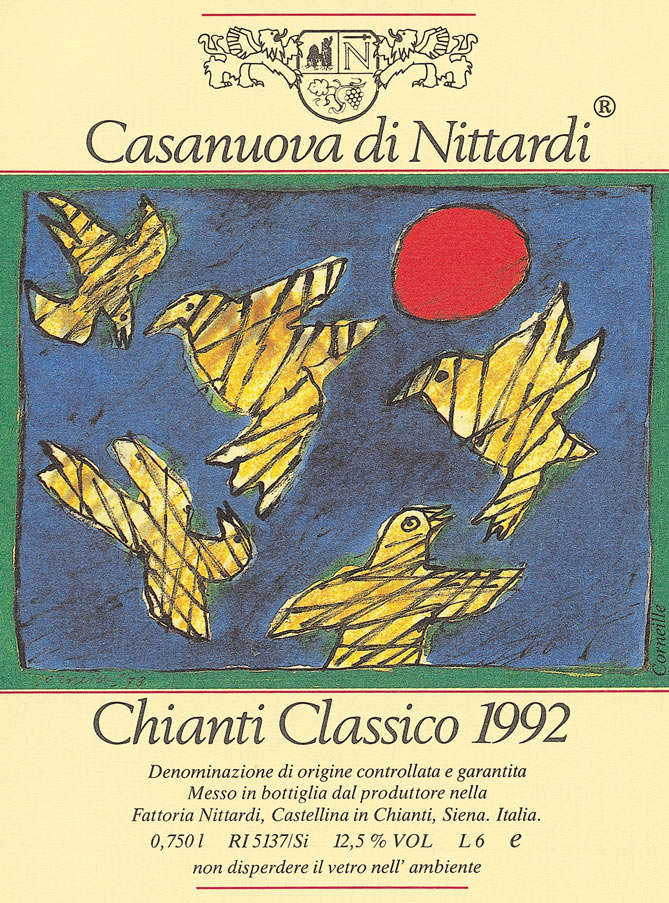 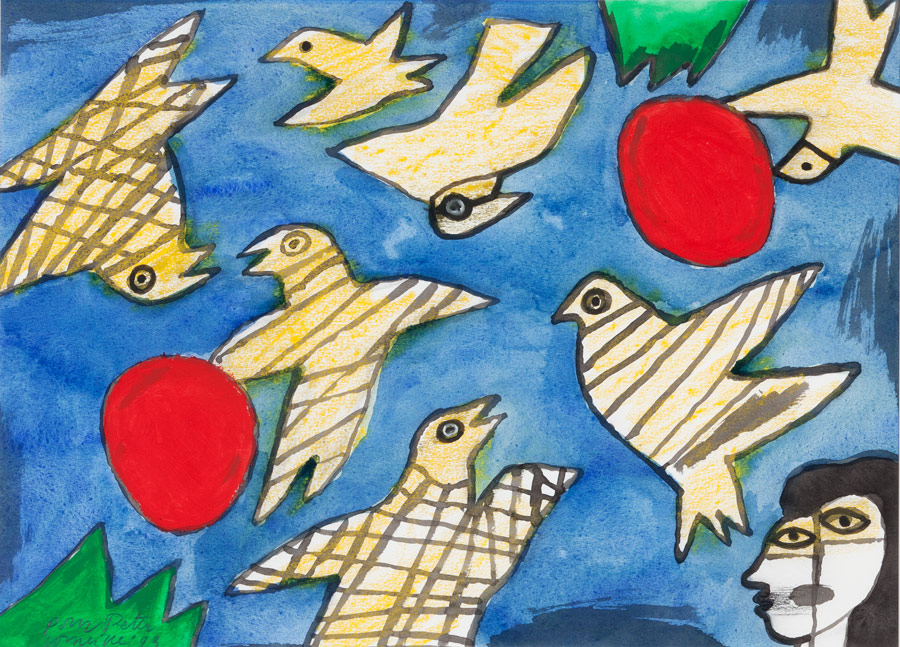 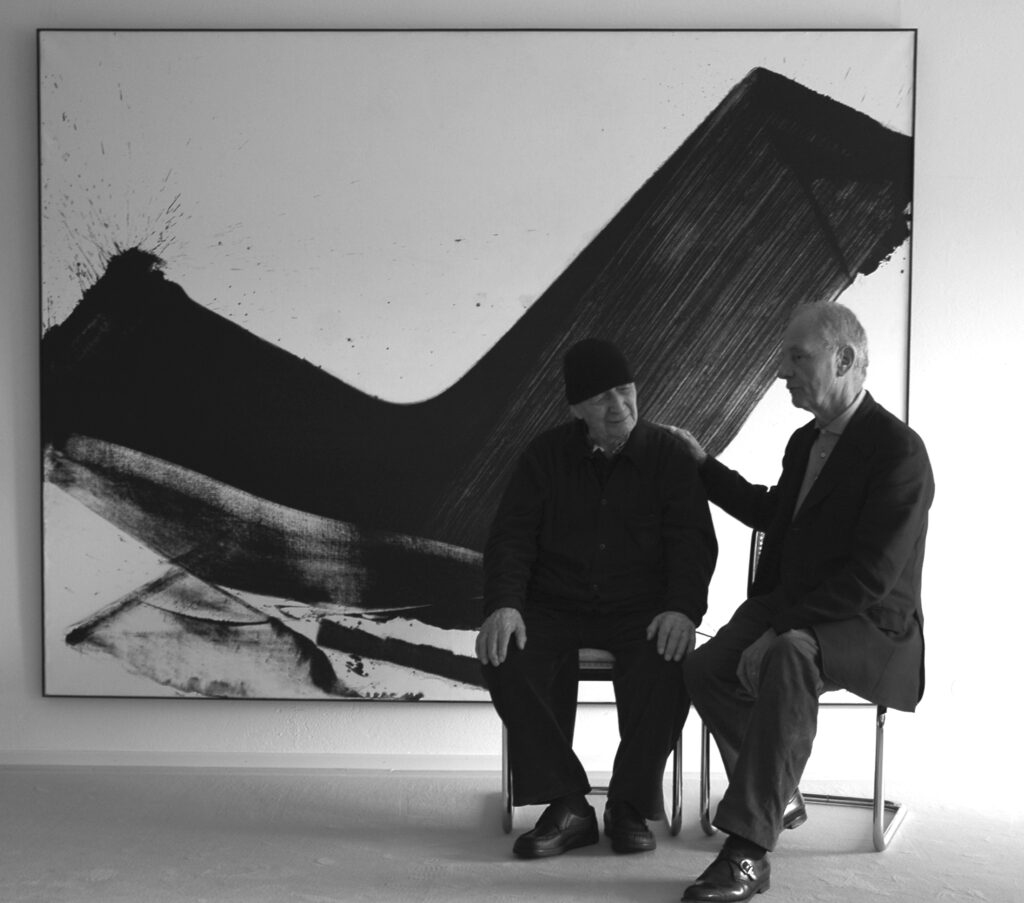 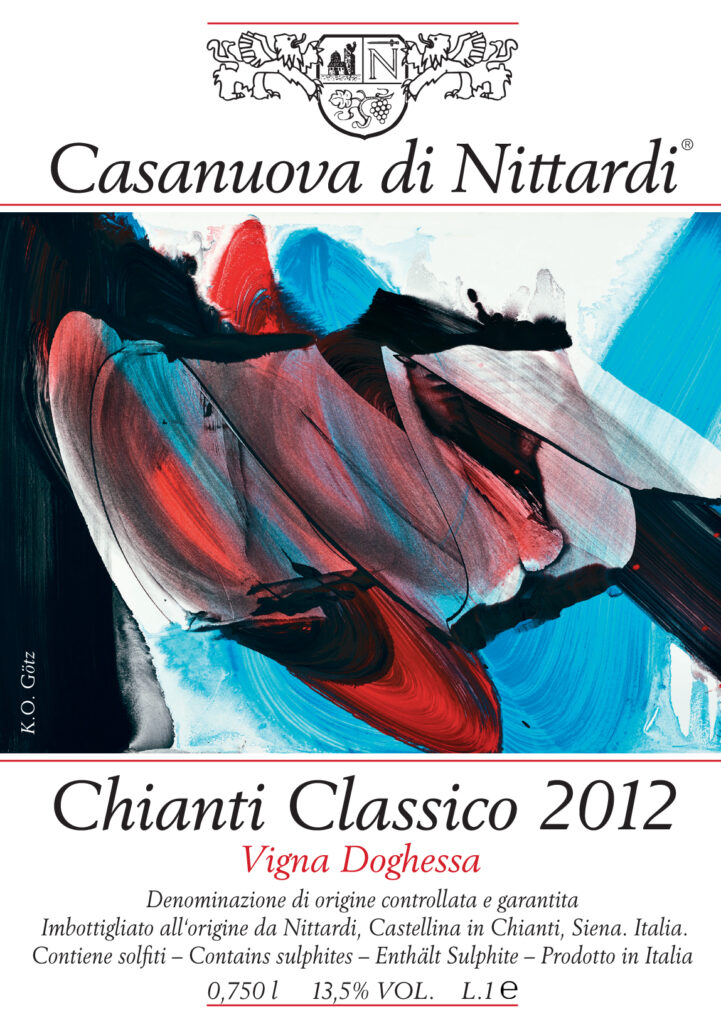 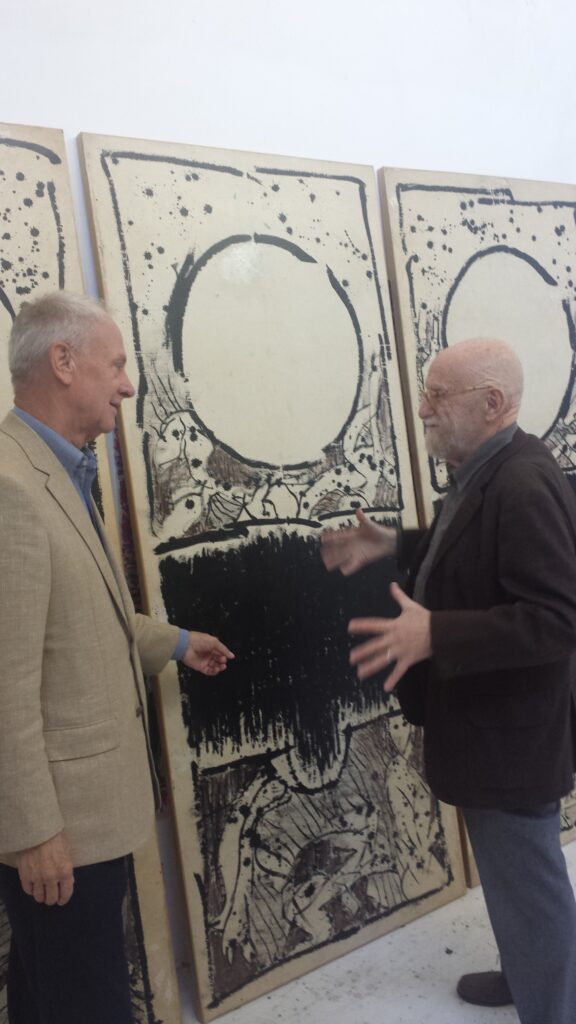 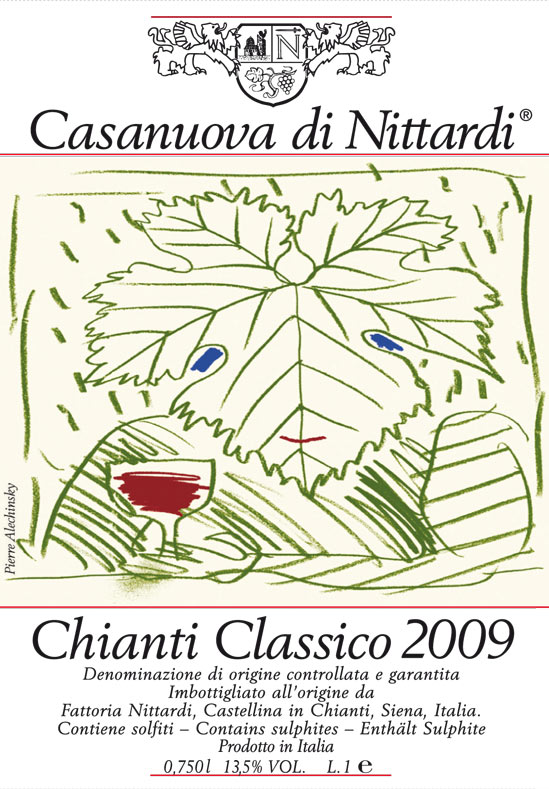 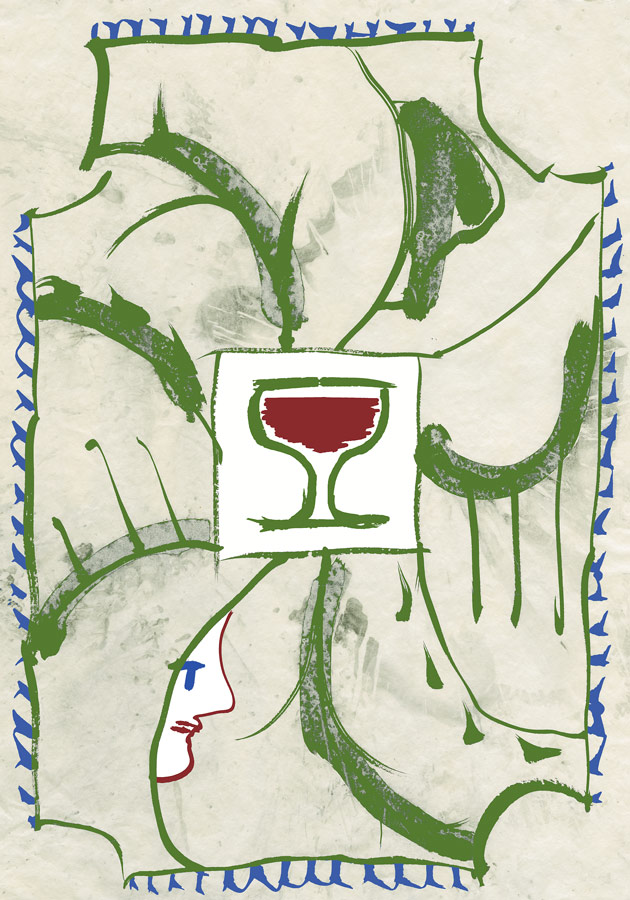 The following is the introduction to the exhibition written by the curator Damiano Femfert that connects CoBrA interestingly with another topic very dear to us Greece:

“The path towards an European Exhibition.

It is sometimes odd to realize how history, the chronology of major events, influences lesser ones. Exactly a year and a half ago – when the crisis of European sovereign debt had flared up again with continual disputes between the EU member countries and yet another new Greek government – we first thought of holding a large-scale retrospective on CoBrA. The desire to carry out a project of international importance specifically in Rome, the only Italian city able to bear comparison with the world capitals of art, led us immediately to the Fondazione Roma and its president Prof. Emanuele, a very knowledgeable admirer of the movement.

While the exhibition was taking shape, events followed one another at incredible speed on the broader stage of history. Due to increasingly drastic measures of austerity, the situation in Greece as regards social life and employment plummeted, leading to the election of the first Tsipras government at the start of 2015. Attempts to establish a different relationship with creditors gave rise to a frenzied spectacle starring all the big names in European politics and culminating in failure to repay an IMF loan at the end of June. The ECB decided to cut off the credit of the Greek central bank, thus instantaneously triggering capital controls in the country. The show reached its tragic climax with the Greek people’s flat rejection of any continuation of the austerity measures imposed.

In this European climate of animosity, fragmentation, mutual blame, rancorous assertion of differences between nations instead of similarities, and tedious portmanteaux (Grexit, Brexit, Dexit), our project appeared increasingly important to us and the curatorial path increasingly clear. CoBrA revolutionized the world of art not only by breaking away from the previous avant-garde movements and asserting its own explosive aesthetic ideas, but also and above all by realizing the need to transcend the frontiers of individual countries and affirm a transnational concept of art and life. Through long travels and stays in then little-known countries, a responsive and fruitful approach to diversity, and a humble drive for inclusion rather than exclusion, the spirit of the CoBrA artists heralded Europeanism.

It was precisely the lesson taught by history through the devastating experience of two world wars that drove CoBrA to spread their new idea of European unity. Great figures and artists differing greatly from one another, including Asger Jorn, Constant, Corneille, Karel Appel, Pierre Alechinsky, K.O. Götz, Lucebert, Carl-Henning Pedersen and his wife Else Alfelt, all realized the importance of the movement but especially the need to look beyond. “CoBrA. A Great European Avant-garde, 1948–51” is grounded in this perspective of fruitful cultural interchange and atmosphere of expressive freedom. The exhibition presents 150 works by 27 artists from 8 different European countries. The careful selection of paintings, watercolors, drawings and sculptures, most of which exhibited for the first time ever in Italy, and their specific arrangement highlight the crucial pro-European aspect of the movement.

Like that of CoBrA itself, the success of this project is due to the common endeavour of numerous people that I wish to thank here: Prof. Emanuele, president of the Fondazione Roma; the director Tatyana Kasyanenko and her outstanding team, especially Chiara Caporilli; my fellow curator Francesco Poli; all the private and public lenders and foundations as well as the artists’ heirs; the authors of the catalogue; Pierre Alechinsky and K.O. Götz, surviving members of CoBrA who lent their active support; Peter Femfert, the gallery owner historically associated with the movement and a personal friend of many of the artists, as well as his assistants at Die Galerie and its director Elke Mohr.

Nearly sixty years after the birth of the European Union with the treaty signed precisely here in Rome and nearly seventy years after the founding of CoBrA, the exhibition offers unparalleled insight into the movement, whose message appears more relevant than ever in this period of crisis in the long path towards european unity. In the De Oratore Cicero wrote: “Historia vero testis temporum, lux veritatis, vita memoriae, magistra vitae, nuntia vetustatis.” (History is truly the witness of times, light of truth, life of memory, teacher of life and messenger of antiquity.) Maybe also to us today the spirit and history that transpire the art of CoBrA can serve as our teacher of life.”

For more information on the exhibition please visit http://www.mostracobraroma.it/ and read the article by Achille Bonito Oliva in the Italian Newspaper La Reppublica