A Symphony in Red for the 2014 Vintage of “Casanuova di Nittardi” Chianti Classico, Vigna Doghessa

The long journey of the artist Hsiao Chin (in Chinese, 蕭 勤; pronounced “chow chin”) began in 1935, when he was born to a high-level bourgeois, intellectual family in Shanghai. His father, the renowned musicologist Hsiao You-Mei, founded the Shanghai Conservatory of Music.

In 1949, Hsiao had to immigrate to Taiwan, where he quickly found his way to painting – and spent the following years travelling incessantly: initially on a scholarship to Spain, then to Italy, France, England, and finally the USA, where he resided for a longer period of time, teaching and learning. But as he viewed the “American Dream” as utopian, he returned to Italy, where he has lived and worked in Milan since the 1970s, taking annual trips to China and Taiwan.

“It is important to remember and understand who we have always been,” says Hsiao Chin, who, as a wanderer between the cultures of the East and the West, has always striven to achieve a universal scale of values. He has designed an enthralment of colours, a colouristic harmony of lines and dots in which the explosive power of the universe merges with the harmonious linework of Zen gardens. The search for the essence of things – the blissful dimension between the manual and the intellect, between the joy of making and that of seeing – is magnificently reflected in the label and wrapping paper he has designed for Casanuova di Nittardi.

A beautiful tribute to the countryside of Chianti, with its harmonic rows of heavy grapes exuding rich, robust, reddish splendor.

This, the 34th artist wine label of the Nittardi Collection since 1981, complements the other, previous works by internationally renowned artists such as Hundertwasser and Yoko Ono, Horst Janssen and Günter Grass, Tomi Ungerer and Pierre Alechinsky, Dario Fo and Alain Clément. 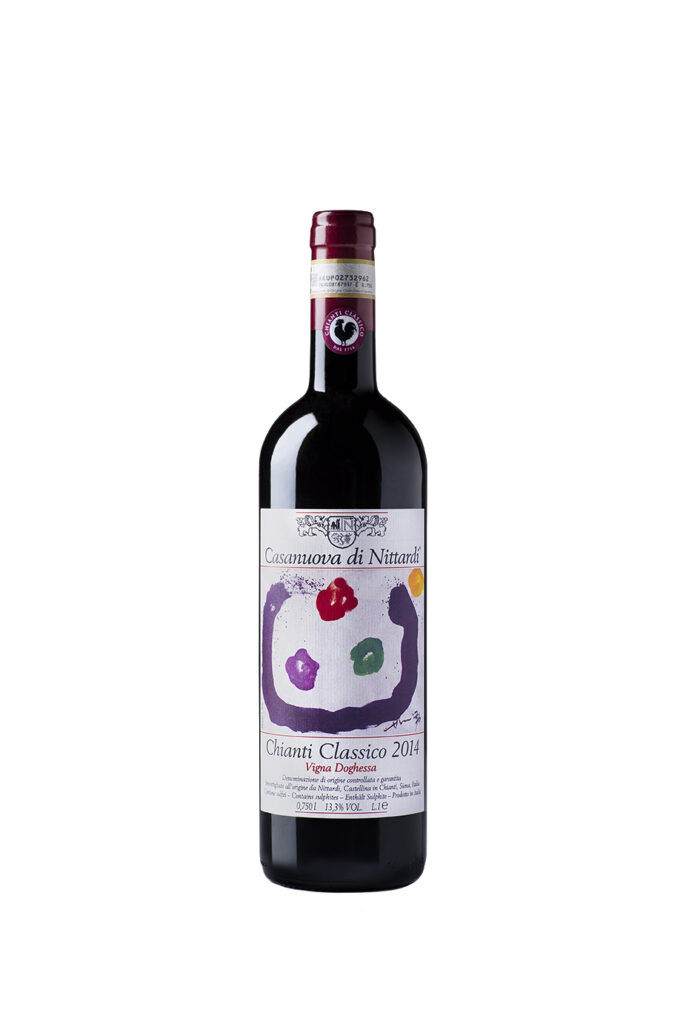