the XXXI Artist Label for Nittardi

the korean artist Kim Tschang-Yeul creates the xxxi artist label and wrapping paper for chianti classico “Casanuova di Nittardi”, the artist represents a milestone for fattoria nittardi: the artist’s label closing cycle of the four seasons marks the first time that an asian artist collaborates with the famous winery.

Kim Tschang-Yeul, one of today’s most important Asian artists, has painted the label and wrapping paper for the 2011 vintage of Chianti Classico “Casanuova di Nittardi”. His work concludes Fattoria Nittardi’s cycle of wine labels dedicated to the four seasons. The cycle was begun by Günter Grass with his autumn label for the 2008 vintage, while the 2009 vintage was graced by Pierre Alechinsky‘s spring label and Dario Fo brought us summer in 2010.

Kim Tschang-Yeul, known for his minimalistic art laden with conceptual suggestions, now brings the season of winter, as represented by his signature water drops, to Fattoria Nittardi. For over the last 40 years the artist has painted his drops of water on diverse surfaces in different forms, colours and transparencies. Full of meanings, these drops represent an important message of hope even as they offer a silent recollection of the fullness and power of life, as everything starts from water.

The misty colours used by Kim Tschang-Yeul for the XXXI artist label, spanning from dark ochre to brown, recall the colours of the earth, colours that are non-violent, natural and silent. The reference here is to the silence and promise of the winter, a season of hidden virtue and affirmation: though the scenery may be bleak, the season itself symbolizes the beginning of the life cycle, as it is in winter that nature begins to grow and evolve silently under the earth, only to explode in full of colour throughout the seasons that follow.

Wine needs all four seasons to mature, and can thus be viewed as a metaphor of life. With this in mind, Peter Femfert, his wife Stefania Canali and their son Leon, owners of Fattoria Nittardi since 1981, have paid tribute the four seasons across the last four vintages of their Chianti Classico “Casanuova di Nittardi” by adorning each vintage with a season-related label by a different artist.

With the following words they explain the profound message connected to the four seasons painted by Günter Grass, Pierre Alechinsky, Dario Fo and Kim Tschang-Yeul:

“The four great artists, two of whom are Nobel laureates, are aligned by shared biographical similarities. All of them were born in the previous century during the 20s and experienced, in their given homelands, the tragedies of war, dictatorship and destruction. And all four also discovered painting as the key to interpret and convey, in the East as in the West, a future of togetherness and commonly shared expectations. A message that pursues the objective of respecting time, the seasons, the immutable cycles of nature, and the serene ease of the earth.”

The thirty-first anniversary of the enological art project of Fattoria Nittardi is being celebrated with the participation of Kim Tschang-Yeul, the first Asian artist in the collection, which now includes a total of sixty-two artworks by internationally respected artists. Aside from those already mentioned, other eminent artists include A.R. Penck, Yoko Ono, Corneille, Igor Mitoraj, Emilio Tadini, Eduardo Arroyo, Giuliano Ghelli, Valerio Adami, Mimmo Paladino, Tomi Ungerer, and Friedensreich Hundertwasser.

The artwork of Kim Tschang-Yeul is one more connection between Fattoria Nittardi and the art world. This important connection goes back to the Renaissance, when Nittardi was owned by Michelangelo Buonarroti. In addition to the important collection of artist labels and wrapping papers at Nittardi, the estate houses an important sculpture garden with works by Miguel Berrocal, Horst Antes, Victor Roman, Raymond Waydelich, and Friedensreich Hundertwasser. The garden is a hymn to beauty, created by nature and augmented by man — similar, in a way, to how a fine drop of wine is only possible as a joint endeavour of nature and man. 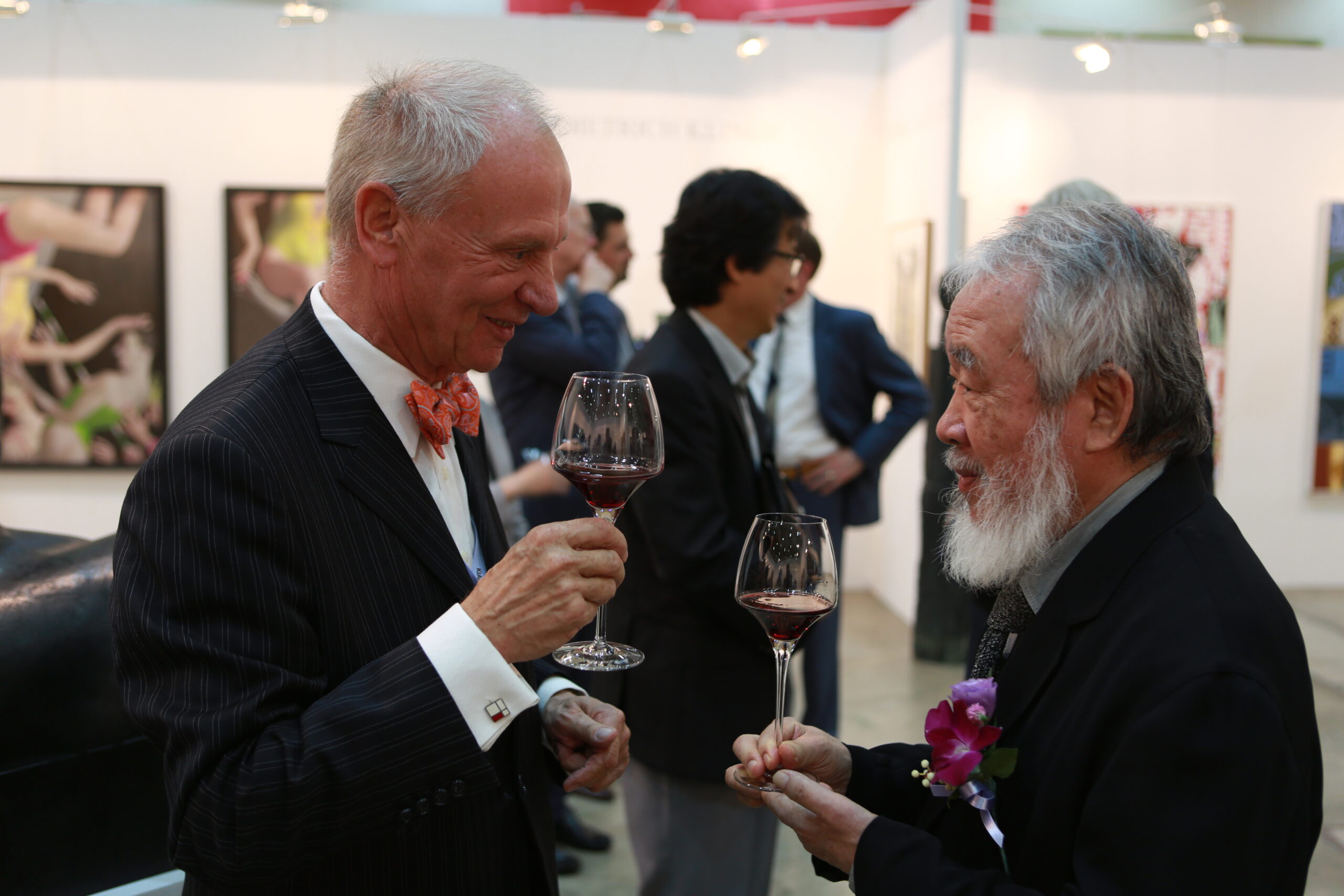 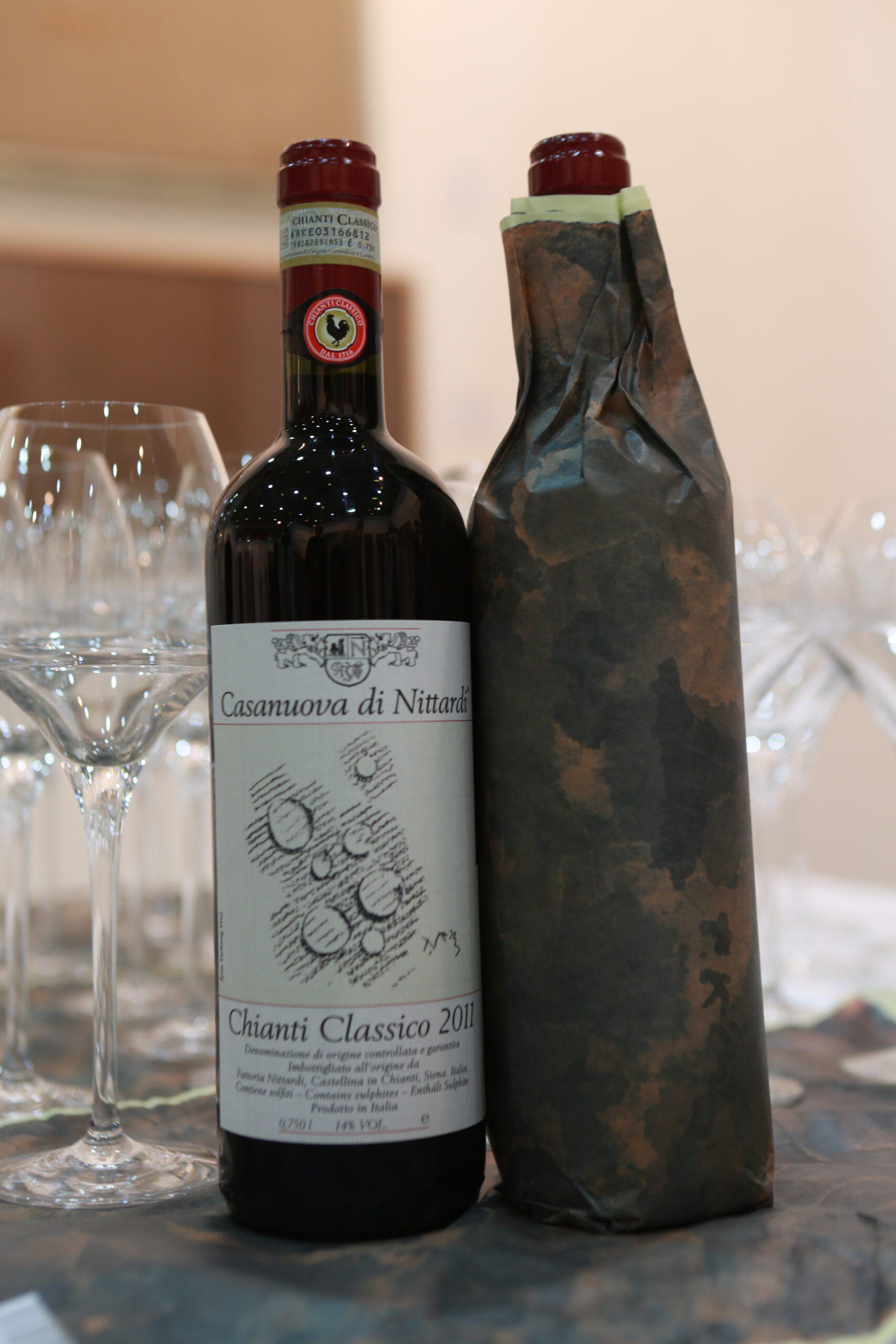 The new label and wrapping paper 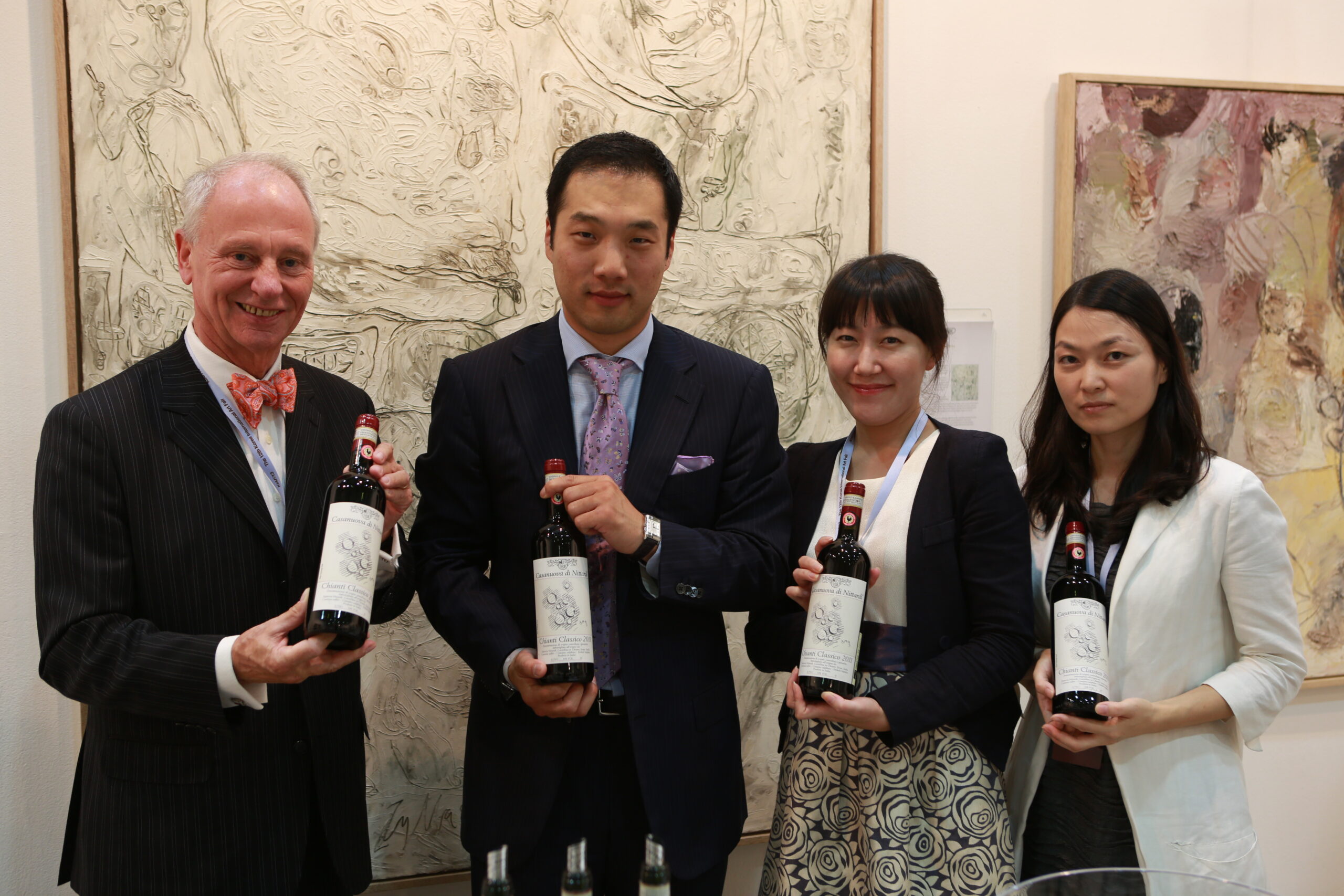 Peter Femfert and the Shindong Team presenting the new label